Technology Trends That Will Dominate 2018 | GO.CO

Technology Trends That Will Dominate 2018 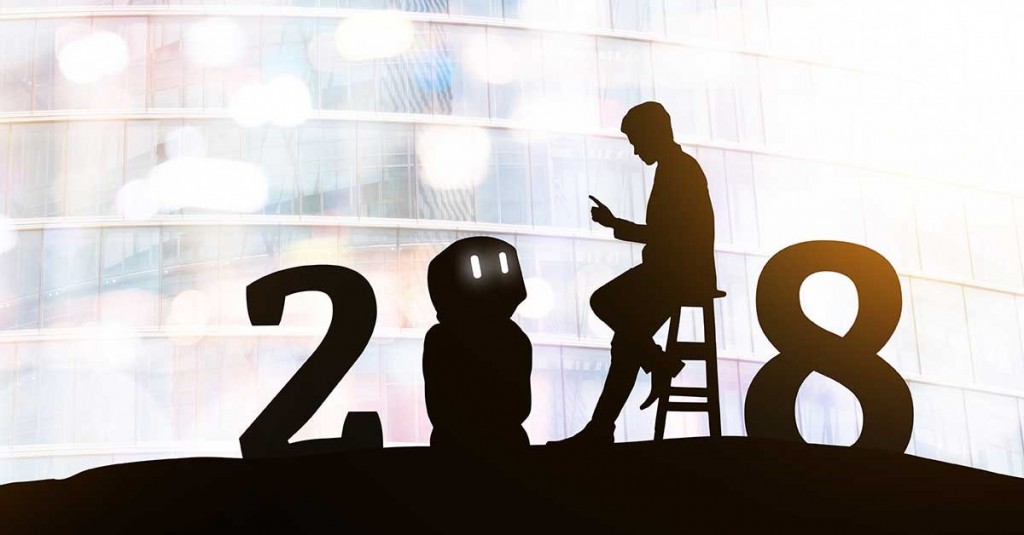 More and more, technology surrounds us, impacting almost every aspect of our daily lives. As a result, it’s somewhat challenging to identify the technologies that will have the most influence during the coming year. While many technologies will alter our lives in powerful ways, others sneak in without our notice.

One thing we can be sure of is that many innovations will continue to expand into new territories. As the year comes to a close, let’s look ahead at the technology trends that are likely to have the biggest impact in 2018.

Recent advancements in AR technology mean it’s poised to grow exponentially in 2018. This is due in large part to Apple and Google’s push to take it mainstream. The recent update to Apple’s iOS mobile operating system includes new abilities to run AR apps. For example, suppose you want to measure whether your TV will fit on a new wall. Apple’s App Store now has a tape measure app that works like a real tool. It displays a tape measure on your phone screen and adjusts the length as you move your phone. Similarly, Google recently released its new Pixel 2 phone, which has AR functionality built into its camera. This year both companies released AR developer kits to ensure more AR apps are built in 2018.

Since the release of Pokémon Go in mid-2016, VR games have consistently made technology headlines. The recent release of VR headsets by game companies like Oculus and PlayStation mean this technology is set to become even more mainstream in the year ahead. The increasing portability of VR gear ensures that its applications will expand outside the gaming world to not only replicate everyday life but enhance it. Together, AR and VR are poised to generate $150 billion in revenue by 2020.

Thanks to advances in natural language processing, AI has begun taking some pretty big leaps into the consumer space. Just think about intelligent personal digital assistants like Siri and Alexa, which are finding new ways to travel with us wherever we go. As this technology continues to get better, it’s making its way into our homes, assisting us with every aspect of our lives. With the advancement of machine learning and new language processing skills, AI is set to takeover the customer service sector as well. Expect more interactions with AI chatbots in 2018. And don’t be surprised if they impress you with their savvy.

Behind the scenes, AI capabilities are increasingly being added to assist with cyber-security, connect the internet of things, and make apps more intelligent. Recently, a Gartner survey showed that 59% of organizations are working on AI strategies. The other 41% have already made progress in either adopting or piloting AI solutions. The AI market is expected to grow to $47 billion in revenue by 2020.

Self-driving cars are increasingly making their way onto our public roads. Across the country, deregulation is paving the way for this to happen. In the last four years, upwards of 30 states have considered autonomous vehicle legislation. As a result, more and more fully autonomous self-driving cars will be testing their road capabilities in 2018. This trend is likely to speed up as advancements and partnerships in the industry grow.

In November 2017 Tesla’s unveiling of a new electric semi-truck promises to focus attention on the future of next-gen vehicles. Featuring a semi-autonomous autopilot driving system that includes automatic steering, braking, and lane changes on highways, this new truck could be the first step in a much bigger long-haul trucking industry shift. And Tesla’s not the only carmaker in the game. In 2017 General Motors produced 130 fully autonomous cars on one of its regular production lines. By 2035 the driverless car sector is expected to generate $77 billion in revenue.

While cloud technology has been around for a few years now, you can expect to see its popularity really expand in 2018. Many businesses are increasingly using the cloud for more than just non-critical functions like CRM and marketing platforms. Instead, they’re relying on the cloud for storing and accessing valuable data. According to recent surveys 90% of organizations are using cloud technology and 20% are running mission-critical enterprise workloads from the cloud. It’s not surprising. The cloud offers a host of benefits, including a reduction in equipment costs, increased storage capacity, and increased collaboration and productivity.

Today the most popular cloud deployments are email, messaging, and communications platforms. In fact, 47% of organizations have already moved some aspect of their messaging to the cloud. It’s estimated that nearly a third of all enterprise resource planning systems (ERP) in the world will migrate the cloud by 2020.

Big data has been around for several years as well. Every day organizations collect enormous amounts of data in every aspect of their business, from marketing and sales, to product usage and more. However, up until now, the potential of what could be done with this data has been largely overhyped and misunderstood.

Thanks to advancements in AI and machine learning, data analytics is poised to revolutionize business in 2018. Experts predict that in the coming year AI will have a much greater power to better analyze data. More than that, machine learning will enable organizations to derive meaningful insights from that data, which will ultimately help them convert that knowledge into action. In 2018 expect real-time data analytics to increasingly become the foundation of how organizations operate with every crucial decision being supported by big data.