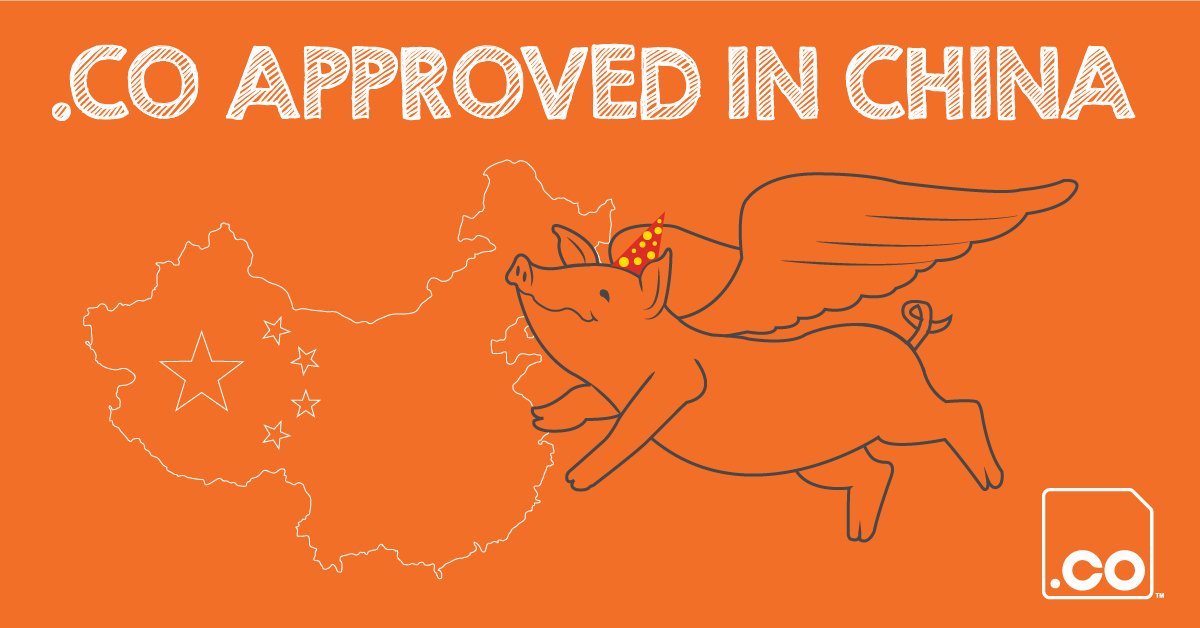 We received some very exciting news today: the .CO top-level domain (TLD) has been approved by China’s Ministry of Industry and Information Technology (MIIT) to proceed with full commercial operations in China.

This is a mouthful, but essentially the adoption of .CO in China allows the tens of thousands of Chinese entrepreneurs and companies who own domain names ending in .CO to operate and manage their domestic Chinese websites from Chinese servers, marking .CO among some of the first foreign TLDs approved by China!

“The final barrier our Chinese .CO domain owners have faced has now been overcome. Domain names ending in .CO are now fully approved in China along with China’s own .CN top-level domain, and other well-known global domains, such as .com and .biz.” –  Crystal Peterson, .CO Internet Director of Sales and Marketing

Since launching for worldwide domain registrations in 2010, vast numbers of technology innovators and entrepreneurs have chosen .CO web addresses. Regularly identified with successful startups and world-famous brands, .CO’s “halo effect” — a certain credibility granted to startup companies adopting .CO domains — is a powerful benefit that is already enjoyed by millions of brands, businesses and entrepreneurs, and will now be available to the Chinese market.

.CO’s partnerships with leading startup incubators and accelerators, such as Shenzhen’s Startup Salad, starting in 2015, provide generous support to the thousands of early-stage startups passing through Startup Salad hackathons. .CO has become a “household name” in the minds of tech sector leaders and China’s startup community has quickly emerged as the world’s most exciting and dynamic.

“Just as Startup Salad chose ‘salad.co’ as our domain name, China’s future unicorns are choosing their own cool .CO domains. Now, with the full approval of China’s government, startups can host their .CO domains here in China, leading to the fastest possible websites for the online services of tomorrow.” –Jim Zhao, Startup Salad CEO

Female entrepreneurship is also booming in China and .CO is increasingly becoming the choice for new generation Chinese women entrepreneurs. Chinese women have always enjoyed equality under China’s progressive social policies, and with the proactive support of China’s government, more and more women are leading China’s boom in the startup culture.

Over the last several years, the .CO brand has won the trust of top China female innovators. Leading influencers such as Vicky Law (VSFS.co) and Yijia Chen (OX3TV.co), were selected as .CO Startup Ambassadors, demonstrating the credibility of .CO domains as an inclusive place for innovators.

We’re thrilled that even more startups, entrepreneurs, and forward-thinking businesses will be able to enjoy .CO’s reputation, stability, and passion for technological advances.  And we can’t wait to see the innovative businesses, brands and ideas that will grow and flourish in China, and throughout the world, thanks to today’s exciting news!